Thanks to Clinton, China now has the capability to strike the United States with multiple warhead nuclear missiles. They have even threatened too, telling us we won't interfere in Taiwan if we value Los Angles. How did they get this capability? Two ways, first through wavers to transfer prohibited technology and secondly spying on China's part. Clinton granted wavers to Loral and Hughs Electronics so they could sell China the technology necessary to upgrade their satellite launching capability so that their satellites made it into space with out blowing up or going off course before getting there. The prior administrations had prohibited this technology because it can also be used to guide Intercontinental Ballistic Missiles. China took the technology and upgraded their ICBM's. Which gave them the accuracy necessary to strike far away countries like the United States. Clinton also gave them wavers to purchase super computers and advanced manufacturing technology, both which are primarily used in advancing military technology. Super computers are used to model nuclear weapons without having to test one by using it, as well as other advanced weapons.

The Clinton Administration has known since 1995 that the Energy Department had discovered a leak from the Los Alamos research lab. But Clinton's administration did nothing to tighten security until January of 1998. Thanks to this failure to stop China's spying, they now have the technology of our most advanced miniaturized nuclear warheads which are necessary to make multi-warhead nuclear missiles. Such technology allows many warheads to be launched on one missile, separate in space and renter targeting multiple cities. The miniature nuke's also can be used in backpack warheads which can be smuggled into a city by a terrorist organization. I heard on the radio today that they also gained access to our other black projects at Los Alamos which are so secret that they aren't even mentioned in the military budget. We know one of the projects they stole information and models of is the EMP weapon. EMP stands for Electro Magnetic Pulse, a strong EMP can put out action anything electronic. Such a weapon can be used to destroy satellites used for spying, communication, etc., battlefield electronics, computers, even entire power distribution grids. The theft of all this technology may be a greater disaster for us than when the Rosenburgs sold the USSR nuclear information. The Rosenburgs were the last people executed for treason in this country..

Clinton still favors allowing China into the World Trade Organization and has continually backed giving China most favored trade status. What has China done with all these billions of dollars in trade? They spent some of it bribing people like Clinton and getting him re-elected in 1996 with campaign contributions. The majority of it has been spent on upgrading China's military. Look how many things you buy today which say "Made in China", the dollars which pay for these things end up in the coffers of the Communist Chinese government..

There is a congressional report on all this called the Cox Report. I was supposed to be released on 1 April 1999 but as of this date 20 April 1999 the White House is still suppressing it's release to the news media and the public..

Don't believe the poll's about Clinton's popularity. They are heavily biased. The questions are poised in such a way to encourage the answers they are looking for. They don't call 11 states at all because they are "too conservative". Frequently there are reports that they hang up on people they call who refuse to answer the way they try to lead them to answer. Often people hang up on them because they are trying to lead them or are bothering them during dinner and such. The polls are generally conducted in the east where the liberal concentration is heaviest. I once was called for a poll and after a few questions told I wasn't in the group they wanted to sample. I have signed up for a certain famous poll on the Internet but since my answers seem to frequently run counter to what they claim everybody answered I didn't get any more invitations to take it after a couple times.

We always see Clinton going around the country being cheered by people like he is the greatest things to ever happen to this country (one of the worst in my opinion..). What the liberal news media doesn't show or tell you is that the secret service and the local police are keeping the protesters away from the president and the cameras. They also don't tell you that these events are packed with loyal democrat party members who were invited to the events before hand. These people just don't show up to cheer on this "great man" (excuse me while I try not to puke after writing that.) because they felt like it. Many times union members are given the day off to attend and are told they are to go cheer on the president. Some of the signs I've heard about protesters carrying at a recent rally here in Arizona when Clinton was in Tucson a few weeks ago: "JAIL TO THE CHIEF", "I believe Juanita", "Warning Sexual Predator in Neighborhood". There were more but I don't have them written down. Here is a photograph of a parade in Germany a year ago to show how our president is viewed world wide and expresses very well how he has dishonored the office of the Presidency. 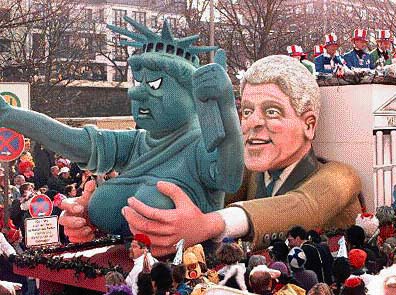 Now we know the Senate really is a bunch of eunuchs like I thought. We also know the democrats are a bunch of partisan hypocrites who on one hand think that Clinton is reprehensible, and according to Senator Bird guilty of perjury and obstruction of justice, but on the other hand should be left in office for the " Good of the People". More like for Good of the Democrats! Although why they support him when he has stabbed them in the back at nearly every turn is a mystery to me. Well, that's not entirely true, many of them have received substantial campaign money from his fund raising.

The Senate did everything it could to throw the trial. They swore an oath to be fair and impartial, but many of them immediately came out and started attacking the house managers and the impeachment process. The whole time the kept pulling stunts to throw the case, not allowing live witnesses, limiting the witnesses that could appear, not allowing any new evidence to be introduced and then complaining all the time there was "nothing new".. As if anything new was needed to prove that Clinton is a felon. The phrase "High crimes and misdemeanors" simply means crimes and misdemeanors in high places, such as the presidency. They also rushed the impeachment trial as fast as they could get away with to try to prevent new information from coming out that would of proven without a doubt that Clinton has a history of sexual harassment.


We must vote out these people who have betrayed the Constitution and rule of law. All the democrats in the Senate along with the 10 Republicans who joined them to not find Clinton guilty. I think we should include many of the Senate Judiciary Committee, particularly Senator Orin Hatch. Also the Senate Majority Leader, Trent Lott. Time and time again the conservative movement has been held back by the Senate. The House has done their part for the most part, only to be impeded by the Senate.

Clinton (as well as a lot of congress of both parties) are supporters of the United Nations. IF you support the Constitution and the Sovereignty of the United States of America you should oppose anything the UN stands for. The UN is a movement towards a world wide socialist government. Socialism has been a failure in every country it has been tried yet we are slowly moving towards it here in the US. If we don't stop it now, I think we will see the end of this nation as we know it in the next 50 years. This country was founded on the principles of Freedom and Liberty for all. Socialism is the opposite of those values! The liberals in the Democrat party ARE socialists! Beware of the "Third Way"! It is still socialism by another name, skunk or polecat it still is the same smelly critter..